Doctor Who: The Day of the Doctor Review(?) 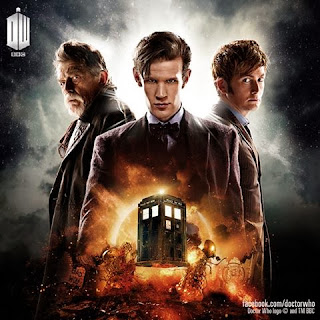 No spoilers here. I did cry.

Watched the pre-show on BBC America livestream. There was a dancing show on BBC One, where a judge commented that a dancer moved like a Dalek.

Lots of references to everywhere. A nod to the classic in the very first scene.

All the Doctors are present, even the classic ones. Well, in a way they all are. You'll just have to watch it to see how.

A classic Doctor shows up in persona, but not in the way most people know. No, it's not Paul McGann (though Paul does show up in the Night of the Doctor).

David Tennant's Doctor is not the alternate universe clone.

Steven Moffat has brilliantly used time travel to tell the story. Alternate timelines may be giving away too much.

No other companions show up, sadly. Many are referenced, though.

As a story, it kinda stands on its own. It's not just hyped-up fanfare, there's an actual story! A story of loss and gain and hope and good stuffs. Also, there is an explanation of how the Zygons are tied in.

The episode is a seismic change in the direction of the show. But not a darker one, as some hoped it would. At least to me, it's not dark at all! It's about hope!

So, I can't wait to see it in 3D with my friends on Monday! :D Can't wait for the Christmas special as well.

Posted by author at 1:50 PM No comments: