Why Dating, Courting, And Generally Just Finding Someone To Marry Are Fundamentally Flawed

Because there are sinful people involved. Yep.

(Written in response to this article and its waves.)

But in seriousness, there are many ways men marry women, and one is not more fundamentally flawed than another. Dating, courtship, arranged marriages and betrothals - all have worked to produce both good, godly, and bad marriages. The whole thing itself always has been a mystery. But God is the one that brings couples He wants together, ultimately. 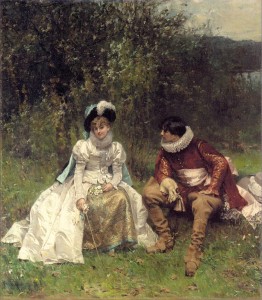 "Whoso findeth a wife findeth a good thing, and obtaineth favour of the Lord."
Proverbs 18:22

“There be three things which are too wonderful for me, Yea, four which I know not: The way of an eagle in the air; The way of a serpent upon a rock; The way of a ship in the midst of the sea; And the way of a man with a maid”
Proverbs 30:18–19

About the article itself, it does make good points, but is overshadowed by bad observations and assumptions. I wouldn't say I wholeheartedly support his recommendation for traditional dating or condemnation purely on his grounds.

There are many Biblical principles that can be applied to any system of marrying. Particularly these important ones:
"Be ye not unequally yoked together with unbelievers: for what fellowship hath righteousness with unrighteousness? and what communion hath light with darkness?"
2 Corinthians 6:14
Principle #1: Christians should marry Christians.

"Can two walk together, except they be agreed?"
Amos 3:3
Principle #2: Christians should marry Christians whom they agree with. Whether in theology, finances, children, etc.

There are more principles.

Rather than prescribing a system to marry or challenging the article's points, I will address what the article calls the problem: high divorce rates (presumably among homeschoolers, Christian homeschoolers that is).

The Bible is clear that fornication before marriage and adultery (which counts as fornication if it is practiced consistently and not repented on) after marriage is forbidden. Guess what? Those two things are the only things that the Bible allows for divorce.

"And I say unto you, Whosoever shall put away his wife, except it be for fornication, and shall marry another, committeth adultery: and whoso marrieth her which is put away doth commit adultery."
Matthew 19:9

So, to keep a good marriage, avoid those things. But enough about the negative, there are positive things to avoid divorce and have a loving marriage, whatever system of marrying you used. Such as:
"21 Submitting yourselves one to another in the fear of God.
22 Wives, submit yourselves unto your own husbands, as unto the Lord.
23 For the husband is the head of the wife, even as Christ is the head of the church: and he is the saviour of the body.
24 Therefore as the church is subject unto Christ, so let the wives be to their own husbands in every thing.
25 Husbands, love your wives, even as Christ also loved the church, and gave himself for it;
26 That he might sanctify and cleanse it with the washing of water by the word,
27 That he might present it to himself a glorious church, not having spot, or wrinkle, or any such thing; but that it should be holy and without blemish.
28 So ought men to love their wives as their own bodies. He that loveth his wife loveth himself.
29 For no man ever yet hated his own flesh; but nourisheth and cherisheth it, even as the Lord the church:
30 For we are members of his body, of his flesh, and of his bones.
31 For this cause shall a man leave his father and mother, and shall be joined unto his wife, and they two shall be one flesh.
32 This is a great mystery: but I speak concerning Christ and the church.
33 Nevertheless let every one of you in particular so love his wife even as himself; and the wife see that she reverence her husband."
Ephesians 5

Really, what I'm trying to say is, if you want to avoid high divorce rates, teach unmarried couples to apply Biblical principles to their pursuit and  married couples to have good marriages before and after they get married.

The Questions at a Split Session #SBCYC14

A little background: Bro. Reno Likins, before preaching a sermon on Tuesday, went into a matchmaking deal. He called up some of the single youth workers and chaperones that were guys and matched them with girls in the audience. I was pushed onstage, and I was matched with a lady named Genna.

I guess that's the IFB version of Christian Mingle?

Anyways, the following day at the split session, Bro. Dean Miller got me up front to ask me some probing questions about it.

"What was going in your head when you sat by Genna?" or something through that effect. The guy is hilarious, by the way. New favorite comedian preacher.

I said I prayed. And I did pray. But that's not the whole story. I chaperoned at this conference because the times I was at Shawnee YC and the Indian Creek Camp were some of the times where God's will was most clear to me. I'm a 20 year old in my senior year of secular college, and I have no/some idea what I will do afterwards. I have a record of past decisions, but my current situation and emotion makes me question.

Preachers always say that the one whom you will marry is the second most important decision after salvation. As much as I looked cool, confident, and debonair in the conference, I was terrified at the possibilities of what might happen next.

I'm not a Calvinist. I believe because there is free will, possible alternate universes/timelines (at least in the mind of God, not physically existing, mind you) where every decision except where God willed otherwise (that is, there are no universes or timelines where Jesus did not come down on Earth and was crucified and rose again, but there are timelines where I picked Reese's Puffs instead of oatmeal for breakfast). In that same vein, each girl that one might possibly marry represents a possibility, a new universe, a timeline, a possible will of God.

"Was she the prettiest girl you sat next to?"

No. (A gasp from the audience, probably one of her friends.) Probably not. Just being honest. Besides, I didn't have much time to study her.

I couldn't name top 5. I've sat next to some of the most beautiful girls. Some of whom have broken my heart.

All I could say was that she wasn't bad at all. She is beautiful in her own way.

After sitting down, he preached on Ruth. Or was it Esther? Probably Ruth. I didn't name the speakers in my sermon notes.

But what rang in my head was that the Holy Spirit and the Lord Jesus Christ speaking to me. I remembered the earlier sermon on Ephesus. I remembered how they lost their first love. I then remembered Bro. Miller speaking on falling asleep in God's will,  and then waking to find his wife. Neat story.

This thought is what rings in my head after all the sermons have almost been forgotten. And within that thought encapsulates my conference decision.

Actually, there's still more to it than that simplification.

Being in a secular college through a Christian college program called College Plus, I meet many, many good Christian girls. Good, yes, but most of them are not the strain of Baptist I was raised in. Some are non-denominational, Reformed, Baptist, all very good Christians and I'm very blessed to be one of their friends. I started to wish I could date/court a couple prospects, because I can't find any girls within my circles of fundamentalism.

What if I married one of these good Christian girls who are not the same exact faith as I have? If God wants me to be a Baptist preacher as I surrendered myself years ago at Indian Creek, then... they don't represent the future, the timeline, the will God wants for me.

And my heart aches, because I have to wait. But that thought still rings in my head.

I pray I surrender to this thought every day.

Thank you, Bro. Miller. I know your questions were in jest.
Posted by author at 10:14 AM 1 comment:

Quick Rundown:
The Shawnee Baptist Youth Conference is the best youth conference I have been to, many times. I've been to Hammond and Grace Baptist Teen Skitacular and a host of many smaller ones, but I love Shawnee's.

Summary.
Monday:
After piling up the suitcases, we left around 8 am in the morning towards Louisville, KY.
Funny orientation video.
First split session. I was at the College & Career class. Bro. Moon preached.
Kenny Baldwin ended the evening.

Tuesday:
Hurricane Bay are belong to us. The wave pool and lazy river were my places to swim.
I met VDP Chief Justice Joshua Speer in the evening service.
Deal or No Deal game.
Bro. Miller preached. Speer left as it ended. Got to meet the family first.
I was arranged by Bro. Reno Likins to have a church date with a lady named Genna before he preached. Apparently, he has some mad matchmaking skills.
I gave Genna my VDP business card. At the end of the sermon, we went our separate ways.

Wednesday:
The last day of the preaching part of the conference.
Split session with Dr. Miller. He dubbed me "Sam the Man". People kept on asking me if I had a good date or if I got Genna's number yet.
Larry Chappell preached on "All Systems Go".
Dave Delaney ended with the sermon "Power Up".
Chaperoned the guys to McDonalds. Nick yelled at them.

Thursday:
The last official day of the conference, held at Kentucky Kingdom. Free drinks with a wristband.
Met some new friends. A couple Whovians. People who kept on asking me if I had made a move yet.
Rides. All you can eat lunch that ended abruptly. Sea lions. More rides.
I saw Chinee, old friend of mine from Grace Baptist of Delaware, Ohio.
Preached a little sermon in the bus.
Toured the creepy tunnels under the church.
Cici's in the middle of nowhere for dinner... and two other churches chanced upon the same one.
Posted by author at 8:52 AM No comments: