Legends of doppelgangery has invaded the real world... in the life of Sam Garcia.

With this proof, I now firmly believe that the CollegePlus! people live in one universe, my youth group lives in another, and that I live in the Twilight Zone of both. And that they are two mirror images/doppelgangers of each. :P *plays creepy music here*
For the purposes of this post, I will label the CollegePlus-inhabiting universe: Universe C+, and the other Universe HS.
EVIDENCE #1:
Jon David Bruegel (Universe C+)
Facts:
President of the Forums
Capitalistic
Christian
I work for him as a Statesman Independent Contractor.
He's my (CollegePlus!) grandpa! :D
John David Heisler (Universe HS)
Facts:
Self-Declared Dictator
Socialist-leanings
Atheist(former Christian?)
I've worked for him as a Advisor.
I do not have any relation to him. :P
EVIDENCE #2:
Beka Kelly (Universe HS)

Facts:
(Assistant) Youth Pastor
Lives In Columbus, OH
Has a picture of himself and Rick Santorum
Michigan State fan
Creeped out, yet?

Posted by author at 1:54 PM No comments:

The Chase Unrequited: http://www.kongregate.com/games/gmx0/the-chase-unrequited
I created this game for a special someone for Valentine's Day.
Music:
I didn't have time to browse for a better fitting music than the Carpenters' love song "Close To You". My mom liked it, so I was forced to keep it. Alternatively, I am willing to experiment with "Fur Elise" or classical love pieces.
Gameplay:
The gameplay itself is a clone of "qrp", which was created by "th15" from wyrdysm.com(He created the popular Battleships Forever). Basically, you move the guy around with the Arrow Keys, trying to "catch the girl", so to speak. The girl avoids you like crazy. My addition to this is the "Moods" that floats around the character's head to indicate their emotion.
Graphics:
I used the graphics from "Unrequited", the sort-of-prequel to this game.
What I Did Wrong:
1. The Flash port is not totally the same as the original. It is very close though.
2. I did not have better, smoother graphics.
3. I did not have more characters and gameplay as originally planned. I did not differentiate it enough from "qrp".
4. I did not get extensive testing before finishing. It may have a harder difficulty.
5. The game was not optimized as best as I could.
What I Did Right:
1. I finished on time. I met my deadline of Valentine's Day 2012, not 2013.
2. My Flash port succeeded compared to my only previous port(Shark Week to HTML5)
3. I kept the gameplay simple, though puzzling enough. There's more than one ending!
Play Now: http://www.kongregate.com/games/gmx0/the-chase-unrequited

Posted by author at 9:39 AM No comments:

Introducing the Mindwrap!
The part where Sam tries to wrap his mind around something exotic and possibly impossible!
In this edition, the Perpetual Motion Machine!
The quest for perpetual motion has plagued engineers for millenia. Physicists, tinkerers, theorists, mechanics, and everyone who is connected to science of some sort have at least theorized about perpetual motion.
Many scientists have risen up to the challenge. Leonardo Da Vinci has reportedly sketched some wheels. But like many of his sketches of tanks and helicopters, it never became reality. At the dawn of the twentieth century, Nikola Tesla, inventor of the alternating current, claimed that a perpetual motion machine could be built if it took energy from the medium it resides in.
Rumors of some perpetual motion machines exist throughout history. As early as the eighth century, there are stories of a "magic wheel" that spun endlessly. In observation, it did rotate for a long time, but the rotation was not endless. One wheel in the Tower of London was reported to have endlessly turned. Proposals range from a "self-blowing windmill" to a "perpetual vase".
The history of perpetual motion seems overly concerned with wheels. Many are designed by using a unbalanced wheel to be propelled by gravity. Magnets are also popular with inventors. Also, the buoyancy is another phenomenon used to create such devices. More recently, proponents of free energy promote research in fields of cold fusion and zero-point energy.
The death blow to this adventure may be the Laws of Thermodynamics, particularly the second law. To echo your science class of days gone by, the first law states that energy and matter is neither created nor destroyed. The second law, in one interpretation, says that energy is always converted to a more less-usable form.
There three types of perpetual motion machinery. The first one violates the Law of Conservation by creating work without any energy being added to it. The second violates the Law of Entropy by converting heat to work, but without any cooling side effects. The third type of perpetual motion is motion that has reduced friction and other opposing forces to zero.
More recently, physicists have discovered time crystals. Unlike other perpetual motion theories, time crystals obey the laws of physics. Unfortunately, time crystals have no useful and practical application, yet. Physicists are working to create experimental versions of these curiosities.
Whether perpetual motion is impossible or not, it touches our sense of longing for something infinite and unstoppable.
Posted by author at 6:35 PM No comments:

Maccabees to Pharisees to Paul

A story of fundamentalism: past, present, and future... 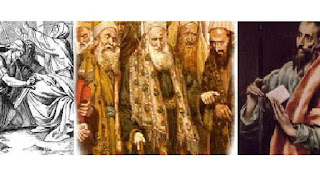 The Past:
Their name meant "Hammer". They were ancient revolutionary heroes of post-Captivity Israel. All looked up to them as martyrs, as leaders. They were faithful to God. They were synonymous of patriotism for their country.
They were called the Maccabees. They are the pride of Israel. They fought against the Hellenizing influences and emerged as the ruling body.
Generations passed. The original Maccabean revolters died. They passed their Law down to their children, and grandchildren. They instructed them to keep it.
The children of the Maccabees are now called "Pharisees". Known for their strict laws and adherence to the Torah, they were feared. They were on the highest religious pedestals.
But when Jesus came, He condemned them as hypocrites. "The descendants of the Maccabees, hypocrites?", the Pharisees wondered as they looked on at the unrecognized Messiah.
How in the world did the most respected degenerate into this condition?
1. Forgetting the Purpose
The Pharisees knew their Law. They debated in the finer points of the Torah. They added extra rules just to keep themselves from going near the fence.
They got... carried away.
Carried away in that they focused on the new rules instead of the underlying purpose. The finer points they had down, the weightier matters... not so much.
2. Faking It And Not Making It
The term Pharisee is synonymous to hypocrisy today. While they prayed in the corners in front of crowds for show, nothing was done for spiritual substance.
3. Carrying on the Name Rather than Building on It
The Pharisees relied on the previous reputation of the Maccabees, and instead of improving that reputation, have tarnished it. Yet they remained dependent on that name to inspire them and make excuses and remind the people of glories past. While they carried the name, they refused to build a better name.
4. Concerned with Power
Power is not graceful. At least, humanly speaking, power is not compatible with grace(oh, the wonder of the divine paradox intertwining both in Jesus!). We have so-called power structures, also known as hierarchies based on merit, "works", if you will. As one gains merit, one climbs the "corporate" power ladder, so to speak. While graceless power structures are necessary in governments and places of employment, it must be less so in our churches. The Pharisees grew increasingly concerned about control and manipulation of others for their own benefit rather than helping and loving.
5. Tightly-Knitted Clique-ing and In-Grouping
While the Pharisees accused Jesus of hanging out with the less desirable people of society, which consisted of tax collectors, prostitutes, the disabled, the diseased, and so on, they did not do anything to attempt to reach out to the same people and kept to themselves. Jesus did not condone the sins of the same crowd, however, His fellowship with them pushed the others to repentance and righteousness. The Pharisees used righteousness as a wall to safeguard their group; Jesus used it as a door.
Were the Pharisees more righteous than Jesus when the Pharisees forbade the sinners to join their little Sanhedrin, but the Saviour let them in into His circles? NO! Were the Pharisees immune to corruption now that they have quarantined themselves from the world? NO! They merely multiplied the power of corruption within themselves.
The Present:
Their name meant a strong stand for Christ. They stood tall in the battlefield against Modernism and Liberalism.
They were the Fundamentalists.
Today, they are reduced to a catchphrase that is associated with terrorists, fanaticism, and scandalous hypocrisy. How did this change come about?
We left our "old time religion", the pure religion talked about in James 1:27.
We focused on our rituals that disguised themselves as "standards", and left our real convictions.
We formed our own cliques and groups, to the point that we are accused of being a secret society and a cult.
We left our first love.
The Future:
A Pharisee rose up among the ranks. He persecuted those that strayed from the Torah with such zeal that he would be the equivalent of Hitler back then.
His name was Saul of Tarsus. You now know him as the Apostle Paul.
He calls himself the "Pharisee of Pharisees". Why do we then know him now as the greatest Christian who have ever lived?
Thus is my theory. If Fundamentalism should produce another "Pharisee of Pharisees"....
One who is trained in the Scriptures...
One who is zealous for the church...
I pray that he would shed the corrupted present shell of Fundamentalism and embrace its new future, a Fundamentalism emphasizing both the Son and Word of God and empowered by the Spirit of God.
A real Fundamentalism. A Fundamentalism that is based on Truth, both inside and out.
Posted by author at 12:55 PM 1 comment:

This was a very interesting competition for game designers. I played around with a few ideas, finally settling to base my gameplay on a game called Lazarus, with a control twist. The competition only allowed for the number 1-5 buttons to simulate the control scheme of Unita Zero.

My entry is aptly named "Neenjah Inna WearHauz". You play a ninja trapped... in all places... a warehouse. For some reason, boxes are falling and you can only stop them by pressing the "STOP" buttons on either side of the screen. To do so, you need to climb your way on the boxes, but avoid being squished. The player starts on "3" and can jump to the right by pressing "4". He can then jump again by pressing "5". Likewise, he can jump back to the left by jumping on "4". And so on and so forth. If the player has reached either "1" or "5", he can press the button again to jump in the previous direction("1" makes the player jump left indefinitely, while "5" goes to the right indefinitely).

Overall, it was tough designing for a platform I have never seen or heard of before. I hope the players will like it!